d/Deaf Sensitivity Training is back in Las Vegas, NV AGAIN via LIVE/INTERACTIVE WEBINAR due to COVID19. Reserve today.

This class is a “must take” to understand the specific needs of those who are (DHH) d/Deaf and hard of hearing. About 10 percent or more of the population has some level of hearing loss. You will know how to better work and live together with members of a thriving and ever-growing Deaf community. POST certified for law enforcement in AZ, SC, NV, MT and others.

Last year the facilitator was an eyewitness to what was to a call for police Civil Standby for a person who is Deaf who was moving out of a house with a tenant and owner as occupants. When law enforcement arrived, what turned from a call for help for the man in what is called “civil standby,” turned into a fiasco of abuse of power and violations of the federal law, the Americans With Disabilities Act, (ADA) by police. In addition, the person was not violent, yet was cuffed in the back, thereby “gagging” the individual and prohibiting the person from communicating.

A live interpreter was NOT provided, but a video connection much the same as Skype or FaceTime was tried. It failed! An officer tried to use VRI (Video Remote Interpreting) which provides ASL (American Sign Language) interpreters through a web-based system. It failed! An attempt to call a local interpreter proved unsuccessful. The VRI did not connect well due to several factors. One was the bright Arizona sun shining on a small smartphone screen. The person did not have eye-glasses in the car which he thought he did not need to move his belongings out of a house. The person was forced onto the ground and scraping burns were inflicted to the person’s body. There was a possibility of a head injury after an officer pushed the person to the ground causing the person’s head to strike the hard ground. Subsequently, a visit to a major E.R.’s burn center was necessary.

Fortunately, there were no permanent injuries sustained. However, the acts of the untrained officers could have escalated to permanent injuries and, or, loss of life. The officers were not trained in Deaf Sensitivity issues, quite obviously. The specific agency did not follow up on quite a few training offers prior to the incident and, as far as I am aware, still has not had extensive training in the subject matter for sworn personnel and other staff.

Several years ago the New York City Police Department was ordered by the United States Department of Justice to pay a woman who is Deaf over $700,000 as a fine in a similar situation. But wait! A year or so later, the same agency was ordered to pay a woman who was Deaf $100,000,00 by a federal court. And not long after, another federal lawsuit was brought against the City where the Police Department was ordered to pay yet another fine of $80,000 for similar violations. That PD’s training department refused to discuss training and the Chief ignored emails and letters about the issue.

Protect yourself and your agency and city/county/state by not only learning what to do when encountering people with hearing loss but why specific actions MUST be done. It’s simply a matter of leveraging. It’s also a fun class to take. There are periodic live-interactive online webinars offered. They are not taped or recorded! Many are listed on our website as dates are confirmed. Some are not as they are private. Join us for an upcoming class.

Check www.DeafSensitivityTraining.com for details. You can register on that site or go directly to the reservation pages that show. Address any questions to 702 430-8685 in Las Vegas or 917 267-9645 or via email to DeafSensitivity@DeptOfEd.org. 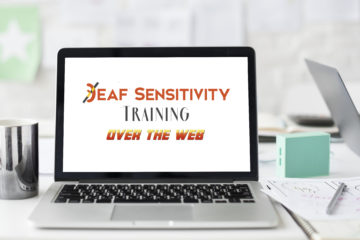 The unique, premiere Deaf Sensitivity Training Class I Never Gave THAT A Thought! is presented world-wide, “LIVE, via the Internet, ONLINE & INTERACTIVE”! It is a 4-Hr., highly intensive class now being scheduled quarterly or more with Read more… 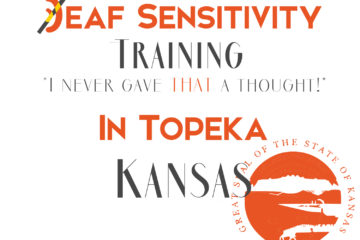 The Deaf Sensitivity Training Class ready to be rescheduled for Topeka, Kansas!. We’ll be working with the Topeka community and talking about the topic of deaf sensitivity and the needs people who are Deaf or Read more… 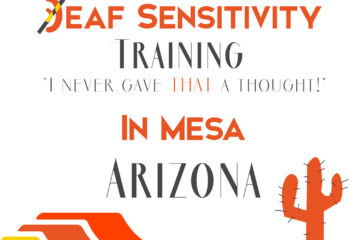 Deaf Sensitivity Training is The Valley of the Sun, (TVoTS) Phoenix metro, Arizona!

The Deaf Sensitivity Training Class is home-based in the Phoenix Valley in Mesa, AZ!  We are working on dates to be announced…or call and schedule an on-site or webinar for your organization. Unfamiliar with the Read more…